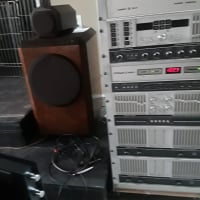 stansje Posts: 8
November 2018 in Crown General Disucssion
With B&W 801 speakers has n't been hooked up in years. I have the manuals but i am a visual learner and cant seem to figure it out.....too much information to absorb.
What I need is a diagram or picture of the back of the components to see what cables go where.
My brother used to listen to it all the time back in the 80's and I miss him since he has passed. I want to listen to it yo bring out the good memories.
0