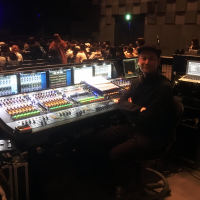 When the operator hit SOLOs in the AUX master bus, operator can only hear the sound before the GEQ, COMP, Gate of that AUX. Operator can’t hear his Comp.
This is very inconvenient, unlike the specifications of a typical live console.
It is no exaggeration to say that SOLO is useless when it comes to applications such as using it as an FB console.

Actually Soundcraft itself has historically been designed like that from their small analog model to the present model. This is based on the most required work procedures in the field. The SOLO of the INPUT channel is used only by engineers to check with headphones in situations where they do not want the guests to hear the sound, and to determine the gain and channel EQ of the mic preamp. SOLO of the OUTPUT bus adjusts the volume, sound quality, and mix balance of the fold-back monitor that is surrounding on the stage or IEM, and the engineer uses “the monitor speaker for the monitor operator (Moni Moni) ” at the desk without moving to the middle of stage. Figure out. This is the basic use of the SOLO function in the work of a live engineer.

There are many models in which IN / OUT SOLO operation can be switched individually by PFL / AFL, but the default is as described above, which is the global standard. I would like to point out that the current specifications of UI24 are far from common sense. The UI24R has a PFL / AFL switch for the SOLO feature, but both the INPUT channel and his OUTPUT bus are reflected in common. If INPUT is set to PFL, OUTPUT will also be set to PFL. This specification is very inconvenient for a live console.

On top of that, another big problem is that if we SOLO the AUX bus, we will only hear the sound of PreProc before the AUX GEQ, comp and gate.
The problem is not concern with the SOLO setting about the PRE fader or POST fader.
The EQ and dynamics sound that the operator has applied to the AUX master cannot be confirmed by the operator's SOLO.
In other words, we cannot hear the same sound that is actually output from AUX OUT with SOLO even if we use same model speaker and amp.
This is a really big problem.

Such a compact and convenient console is popular to use as FB console. It can be used as a monitor desk even in a very small stages. Really actually such small rack mixers such as Behringer and Yamaha are used it for smaller venues live tours. I know well that it is being done. For example, foreign bands are not able to attract as many audiences as their home countries, so they are forced to tour overseas in smaller clubs that are smaller than their original place of domestic activities.

Engineers who perform monitor operations in stage side otherwise dressing rooms have a monitor speakers at their foot, and during the production, switching SOLO the AUX bus to listen to same sound each stage musician is listening to.
At this time, the FB engineer is trying to hear the same sound on the stage by using the same amplifier and speaker as the musician, but with the current specifications of UI24, we can only hear a completely different sound. It’s no meaning as the work.

Regarding the SOLO settings of the INPUT channel and OUTPUT bus, I want you to be able to switch between PFL / AFL individually and also switch between Pre Proc / Post Proc during AFL. At least, I think it's okay that it is fixed to Post Proc when it is a Post fader. (But I need PFL for input channels while AFL+PostProc for AUX bus). I feel that the current specifications are impossible to use as FB console.
This UI is actually sold by a leading manufacturer called Soundcraft. It's a surprise in a badly meaning. I guess it’s easy to fix into firmware. So I still expect Soundcraft.